How Famous Leaders Overcome The Impossible And Achieve Their Goals

BY Tami Brehse In Great leaders, famous leaders On Oct 31, 2017 With 2 Comments

What challenges are holding you back?

For many of us, our challenges are related to money. We don’t have enough to accomplish our goals. We’re not making as much as we need to be making.

Or maybe it has more to do with circumstance. A deal you were counting on didn’t come through. Someone else beat you to the finish line.

But what about challenges that are truly incapacitating—physical paralysis, hunger, homelessness, death? How would you respond in the face of those obstacles?

When faced with such insurmountable challenges, many of us would throw in the towel, but those are the times when the greatest leaders keep going. In this post we’ll look at a selection of famous leaders who courageously overcame seemingly impossible odds. We’ll learn how they went on to achieve their goals in spite of adversity and what we can take away from their triumph.

But her achievements didn’t come easy. Chisholm was born to two immigrants from Barbados in Brooklyn in 1924, and work for them was hard to come by. At the age of five Chisholm was sent back to Barbados to live with her grandmother while her parents struggled to make ends meet.

She eventually returned to the states and went on to obtain degrees from Brooklyn College and Columbia. She began a career in early childhood education and worked her way up to director of multiple childcare centers, where her work sparked an interest in child welfare. Chisholm was inspired to run for—and win—a seat in the New York State Legislature.

Related: How To Use The Right Leadership Styles To Motivate Your Team

Though by anyone’s measuring stick Chisholm had already achieved great success, she had her eye on a higher office: the Presidency. In 1972 she announced her bid for the coming election.

Chisholm was met with opposition from seemingly all sides—for being African American, for being female, and for lacking the massive campaign funding of other candidates. She was caught between a rock and a hard place, and later said, “They think I am trying to take power from them. The black man must step forward, but that doesn't mean the black woman must step back.”

Despite seemingly impossible odds, Chisholm saw her campaign through to the end, gaining support from the likes of Betty Friedan and Gloria Steinem. She was ultimately defeated in the primary by Senator George McGovern.

Chisholm’s work still wasn’t done, though; she continued to serve in Congress for a decade more, campaigning for the minimum wage and rights for inner city residents. She later taught on women, race and politics at Mount Holyoke College.

Shirley Chisholm faced prejudice and adversity nearly all her life but refused to listen to any of her detractors. Despite opposition due to her race, her gender and her upbringing, Chisholm persisted and went on to become one of the most accomplished American political figures of her time.

We can take a lesson from Chisholm’s courage; even when the world is telling us it can’t be done, our fate lies solely in our own hands.

A great leaders takes charge of their cash flow! Use our free Cash Flow Forecast Tool to get a better handle on your company's financial health. 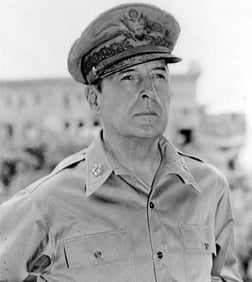 From his early years, five-star general Douglas Macarthur seemed destined for greatness. He grew up in a military family and graduated from West Point near the turn of the 20th century with the highest honors in his class. From there he served in the U.S. occupation of Veracruz and fought on the western front during World War I, both of which earned him nominations for the Medal of Honor.

After serving in various leadership roles and advancing to the rank of general (the youngest in the US Army at the time,) Macarthur was promoted to army chief of staff in 1930 and worked to preserve the strength of the branch in the face of the Great Depression.

Though Macarthur would accumulate more than 100 military awards and accolades during his lifetime and afterward, his career wasn’t without a healthy dose of adversity. The thing about Macarthur was that he was unwavering; when he saw something as the right decision, he was willing to move forward with it at all costs no matter who or what stood in opposition. This often cost him in the form of a sinking public opinion.

In 1932, for example, he met with great criticism for his response toward the ‘Bonus Army,’ a group of World War I veterans seeking an early payment of their promised bonuses for serving during the war. Macarthur lead a charge of infantry and cavalry and used tear gas to drive the group from where they’d assembled on government property in Washington D.C.

Macarthur’s next public controversy came during the Korean War, during which President Harry Truman relived him of his command. That’s right—he was fired by the president. Once again Macarthur’s strong resolve was to blame; he had engaged in a very public dispute with the president over the scope of the fighting, and Truman removed him “so that there would be no doubt or confusion as to the real purpose and aim of our policy.” Ouch.

Macarthur passed away in 1964 and remains one of the most controversial military figures, even in death. Macarthur, though, was never one to let the opinions of others sway him from his path.

He said, “a true leader has the confidence to stand alone, the courage to make tough decisions, and the compassion to listen to the needs of others. He does not set out to be a leader, but becomes one by the equality of his actions and the integrity of his intent.”

By making the “tough decisions” and being unafraid to stand resolutely for what he believed in, Macarthur cemented his place as one of the greatest leaders in history. We can emulate his resolve to be confident, courageous and compassionate, holding what we know to be true above the opinions of others.

Related: The Defining Qualities Of A Great Leader And How To Cultivate Them In Yourself 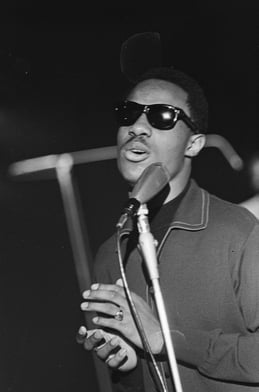 We all know Stevie Wonder as the piano phenom behind musical hits like ‘Isn’t She Lovely’ and ‘Superstition.’ And, as most know, Wonder met his first obstacle in life before ever leaving the hospital; he was born six weeks premature with an eye condition that resulted in permanent blindness.

But blindness, believe it or not, wasn’t the biggest adversity Wonder would overcome on his journey to the top of the musical charts.

One of six children, Wonder (who was born Stevland Hardaway Judkins) grew up in poverty, his mother struggling to put food on the table. His father is reported to have verbally abused his children and physically abused Wonder’s mother, forcing her to work as a prostitute on the streets for income.

When Wonder was four years old, his mother held a knife to his father, gathered up her children and escaped to Detroit, where she was eventually able to scrape together enough money for the down payment on a home.

Despite his rough childhood (and being unable to see), Wonder picked up the piano, the harmonica and the drums like a natural. By the age of 11 he was discovered by Ronnie White of the Motown band the Miracles, and not long after that, he released his first hit single.

By the time Wonder was a teenager he was a virtual one man show, writing, playing, arranging and producing his own music. At 21 he negotiated a revised contract with his label, Motown, that made him their first artist to have complete artistic control. That didn’t stop the label, however, from keeping $29 million of the $30 million Wonder had earned as a minor.

In 1973 his career came dangerously close to being cut short after a serious car accident left in a coma for several days. Thankfully, he recovered, and went on to collaborate with such icons as Elton John, Gladys Knight, Paul McCartney, Michael Jackson and many more.

Wonder’s career has spanned more than four decades of making and performing music, during which he’s recorded more than 30 top ten U.S. hits, sold more than 100 million records and earned a whopping 25 Grammy Awards. He also holds a place in the Rock and Roll Hall Of Fame.

Even the smallest of his obstacles would have been enough to prevent most people from achieving success, but Wonder preserved in the face of it all. His impact reaches far beyond the musical world as well, with extensive humanitarian work to raise money for the blind and impoverished, curb drunk driving and drug abuse, and spread awareness of AIDS.

It’s as if Wonder took every challenge life threw at him and used it as fuel to reach new goals. He spoke with one newspaper about his feelings on adversity, saying “I never thought of being blind and black as a disadvantage… I was just blessed to have ideas. The genius in me is God – it's the God in me coming out.”

What can Wonder teach us? For starters, not to spend a minute feeling sorry for ourselves. And then, once we’ve achieved success in spite of our challenges, to go the extra mile to make a lasting impact on the world in a bigger way.

Which famous leaders are most inspiring to you? Leave us a comment and tell us what you've learned from them.

Check out our other great content on powerful leadership:

How Great Leaders Overcome The Fear Of Failure

How To Use The Right Leadership Styles To Motivate Your Team