As an entrepreneur, time is your most precious resource. When you’re already firing on all cylinders, it can be difficult to envision how to bring new streams of income into the mix.

But what if we told you there were viable ways to generate more revenue each month without doing anything new (or by just making a few small changes)? You’d probably want to hear about it!

The internet makes it easier than ever before to take advantage of additional revenue streams without much extra work—in other words, working smarter, not harder. Here are five ways to boost your bottom line with minimal effort or financial investment.

If you sell a physical product or a service that can be easily replicated, an affiliate program is the perfect way to expand the reach of your business without the investment of hiring new employees.

You know what franchising is, right? Well, an affiliate is almost like a mini-franchise on an individual basis. Essentially, you’re giving your product to someone else to sell, and in return they’re paid a commission on each sale.

We’ve heard a lot of failure stories around affiliates, like companies that launch an affiliate program and get nothing but crickets as a response. Here’s our best piece of advice: make your offer to affiliates as attractive as possible.

For example, don’t offer a measly 10% commission on each sale. Who wants to work hard to sell something for just 10% of the return?

Instead, bump it up to 50% and make it really worthwhile for them to sell your thing. Think about it: even at a 50% commission, that’s free extra money coming in your door each month. You’re not losing anything by offering a higher commission. What you’re doing is incentivizing quality affiliates who will actually put time and effort into selling your product.

There are several cloud-based platforms that make managing your own affiliate program feasible in just a few minutes per day. LeadDyno is one option we like that’s both easy and affordable.

Not quite ready to outsource your business to the masses? Why not become an affiliate yourself on a product or service related to what you already sell?

For example, let’s say you do tech support for medium-sized businesses. You might become a Microsoft affiliate and make a commission each time you help one of your clients install Office 365, which you probably do pretty often anyway.

Or, let’s say you run an ecommerce shop selling essential oils. You could become an Amazon affiliate and suggest complementary products like aromatherapy candles as an add-on during your checkout process. You make a portion of the profit on each order.

It’s a tiny bit of extra effort that can mean anywhere from a hundred to a few thousand bucks of additional income each month.

When something is white labeled, it means company X puts their branding on company Y’s product and sells it as their own. It might sound strange, but it’s something almost every major retailer does.

Look at Target’s Up & Up product line, for example. Target doesn’t independently manufacture all of those goods. They buy them at a discount from other manufacturers and sell them as their own. The same goes for any generic or “store brand.”

If your product or service is something a bigger company might be interested in selling, you can offer to white label it for them.

Another similar arrangement is a licensing deal. In this type of contract, you agree to allow another company to use or sell something that belongs to you for a certain amount of time. For example, you might agree to let Sears sell your proprietary tool box for the first quarter of the year in exchange for a portion of the profits.

A licensing agreement can be a great way to get your product in front of a much larger pool of potential customers than doing it on your own. Just be sure to read the fine print before signing any licensing or white label deal so you understand what’s expected on your end of the bargain. 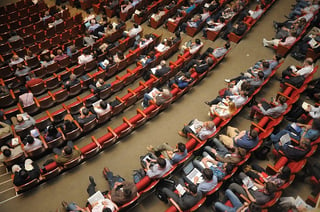 Depending on the type of work you do, creating a branded event can be a major moneymaker.

If you’re pretty well-established in your field, you might host a conference or summit. Enlist a few industry leaders to speak, then invite your customers and prospects to attend for a fee.

If you haven’t built a large following just yet, you can do this on a smaller scale by hosting a seminar or webinar.

If your focus is primarily on one field—finance, education, non-profit, or whatever it might be—consider expanding into a second or third niche.

This tactic requires the most up-front effort, as you may have to build out new systems to suit the new industry. But once that’s complete, you can scale the new niche in much the same way you carved out your first one. Many of the marketing techniques and selling points will remain the same.

As an example, I once worked with a SaaS company a few years back that primarily served customers in financial roles, like bookkeepers and controllers. They found that by making a few tweaks to the software, it was fairly simple to release an “edu” version, tailored to colleges and universities.

This opened up a large (and lucrative) new revenue channel, with very little investment in new infrastructure.

By working smarter, not harder, you can maximize your revenue on the work you’re already doing, without putting in many additional hours each month.

For more strategies on running a profitable business, subscribe to our blog below!

Why Boring Is Profitable

Double Your Business Revenue in 12 Months