2014 Tax Returns and Obamacare: What it Means for You

BY Meghan Fleury In Outsourced Accounting Services On Feb 11, 2015 With 0 Comments

We're taking a break this week from our normal business tax preparation series to focus on individual tax returns. This is the first year the Affordable Care Act (commonly referred to as Obamacare) will come into play, impacting your return. It's important to understand the rules, regulations, and penalties of Obamacare before having your 2014 tax returns prepared.

Watch the video or read the full article to find out how the Affordable Care Act could affect your taxes this year:

If You Had Health Insurance Coverage in 2014:

Your tax return won't change that much. During your tax preparation, you'll have to check one box on the forms that tells the IRS you had coverage in 2014. That's pretty much the jist of the changes for you.

If You Didn't Have Health Insurance Coverage in 2014: 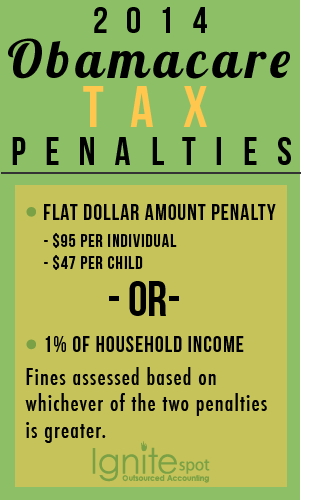 The IRS is charging penalties this year if you weren't covered by health insurance in 2014. These penalties are based off two formulas that determine your fine.

According to the IRS, you'll be fined whichever of the two penalties is greater.

The household income is determined by taking your adjusted gross income, which is the total amount you made in a year, and subtracting a threshold amount.

If you make below a certain income threshold in a year, the IRS doesn't require you to file a tax return. These thresholds are $20,300 if you're married, and $10,500 if you're single.

You're a single individual so your threshold is $10,150 and you earn $50,000 a year, . All you have to do now is plug these numbers into the household income equation as follows:

Determining Which Penalty is Greater

As stated before, the IRS will fine you based on whichever of the two penalties is greater. To determine what your penalty would be, take your household income of $39,850 and multiply is by 1%.

Since the flat dollar amount penalty is $95, and the penalty based on your household income is $39.85, the IRS opts for the greater of the two. So you're looking at paying the flat dollar penalty of $95 on your 2014 tax return. 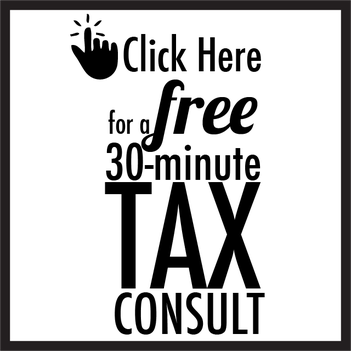 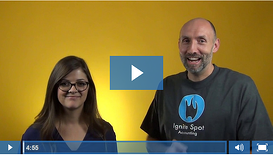 Meghan: And I’m Meghan and I’m in the marketing department.

Ryan: We’re excited to be here today and excited to talk to you about Obamacare and what it means for your individual tax returns.

Meghan: So you don’t have to provide any form of proof besides checking a box?

Ryan: You do not have to provide any proof besides checking a box this year.

Ryan: And in fact, quick side note, the IRS has had their budget slashed this last year, so they have less money than they had last year. Plus they’ve been given full responsibility of covering Obamacare as well as doing their regular IRS duties. So they’re in a bit of a pickle this year and trying to figure out how they’re going to manage and control all this.

Ryan: So there are some forms and some things you need to know if you have not had health insurance coverage for the 2014 tax year.

Ryan: What the flat-dollar amount penalty says is that, under Obamacare, there are three plans: your gold, your silver and your bronze. They’ve averaged out the bronze plan nationwide and said that, on average, it costs $204 a month. And so what they’ve said is, based on this flat-dollar average, they’re going to come in and they’re going to assess what they’ve calculated is a penalty of $95 per individual and $47 per child for not having health coverage.

Ryan: The formula’s a little different than, but for the most part for most individuals who haven’t had coverage will fall under the $95 or $47 bucket. The other calculation they take is your household income. So what they’ve said the penalty is the greater of the flat-dollar amount or 1% of your household income.

Ryan: The threshold amount is basically the IRS has thresholds where if you make under a certain amount of income during the year, you don’t have to file a tax return.

Meghan: What if you’ve only been covered for part of the year, does that still count as full coverage?

Ryan: No, there’s some exemptions out there where potentially you can get away with, under some 3-month minimum rules, where it’s possible you won’t have to pay the penalty for those months. But the IRS does calculate the penalty on a month-by-month basis.

Marketing Specialist at Ignite Spot who is either in the middle of five books or on a mountain trail.