I’ll be the first to say it: I hate networking. Loathe it.

Get me around a group of friends and you’ll be telling me to keep it down all night. But a room full of business professionals I’ve never met before? No thanks.

It’s not that I’m shy. Far from it. It’s just that the task of forming that initial connection it takes to make networking worthwhile can be exhausting. Doing it right—and not being sleazy—takes a lot of effort!

But on the other side of the coin, being successful in business really is about who you know. A strong professional network can make the difference between tepid survival and enormous entrepreneurial success.

In one survey, 85% of professionals said face-to-face meetings allow them to build stronger, more meaningful business relationships, while 77% said they prefer chatting in person because of the ability to read body language and facial expressions.

So there’s no denying it: networking is important for an entrepreneur. From one networking-hater to another, here are five ways I’ve found to make it work for you—no sleaze required.

You know those people who know everyone?

Some people are just natural-born connectors (side note—Malcolm Gladwell does a fantastic job of explaining these people in depth in The Tipping Point. Highly recommend it.).

Anyway, such people exist, but not all of us have the natural tendency to connect and socialize that builds such powerful networks.

One of my favorite fake-it techniques for mirroring this in my own life is the “one connection per week” rule. Essentially, you just have to reach out to one person each week that you’re not already acquainted with and make an effort to form a relationship.

My favorite thing about this is that it can be done without setting foot in a single networking event.

Maybe you read a super useful blog post about your industry. You might shoot an email to its author telling them how much you enjoyed it and asking a follow-up question.

Or, maybe you met someone cool in a similar field at a party last month. Send them a Facebook message inviting them to coffee one afternoon.

They won’t all bite on your outreach, but some will, and it’s a great way to casually build your network without the formality of exchanging business cards.

No matter how much you dislike networking events, it’s almost inevitable that you’ll attend a handful of them every year.

To make them more palatable (and actually form meaningful connections), go in with a “how can I help you?” mindset.

For each stranger you chat with, actively look for ways you might be of assistance—not for any sort of profit, just out of goodwill. You can even make it a sort of contest with yourself: how many favors can I rack up for people at this one event?

When you ditch the feeling that you’re supposed to “get” something out of a networking event, it totally takes the pressure off, at least for me. 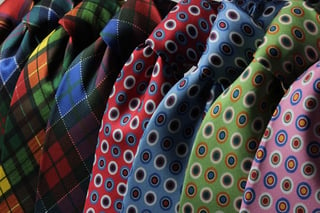 This is a cheap trick, but it works.

Wear something that will be easily memorable to people you meet at an event. Maybe it’s a suit jacket in an unlikely color or a noticeable pair of shoes.

I have this really unique but classy pair of floral pumps I break out anytime I’m going to be around lots of strangers. Not only do they provide a memorable characteristic for people to attach to my name, they’re a great conversation starter in a room full of awkward so, what do you do?’s.

Meeting people is just act one of successful networking; for anything to come of it, you have to actually follow up!

An easy way to do this without the stiffness of an email is to connect with your new contacts on social media.

I find Twitter to be the ideal platform for this. It’s not as buttoned-up as LinkedIn, but it’s also not as personal as friending someone on Facebook. It’s the perfect social network for casual acquaintances.

You can easily jump in and reply to someone’s recent Tweet, not only to add something constructive to the conversation, but also to remind them ‘hey, I exist!’ I also love Twitter’s Lists feature, where you can essentially make a private rolodex of networking contacts you’d like to keep tabs on.

70% of the US population has at least one social media account, so if not on Twitter, you should be able to track them down somewhere else.

There’s no getting around it: to find success in networking, you have to show up. It’s not something you can send an assistant to do for you.

Here’s a good rule of thumb: for every “thing” you’re invited to—Chamber of Commerce lunches, charity dinners, whatever—say yes to half of them. This gives you plenty of wiggle room to decline the ones you’re truly not feeling, but holds you accountable for showing up at least some of the time.

And you know what I’ve realized? Once it’s all said and done, networking shindigs are almost never as obnoxious as you make them out to be in your head beforehand. Sometimes, they’re even quite enjoyable.

Got any networking tips for the not-to-networking inclined? Share them with us in the comments section.

For weekly tips and tricks on running a more profitable business, subscribe to our blog.

How To Set Boundaries as an Entrepreneur

How To “Trade Up” Your Problems