How Complaining is Slowly Killing Your Soul

Self-awareness is no doubt one of the hardest traits to master, but I want you to be really honest with yourself for a second: are you a complainer?

We all complain from time to time, whether it’s waiting on hold for customer service or sitting in traffic or whatever. But are you a chronic complainer? Does it always feel like there’s something bugging you, like the world is out to make your life tedious?

Whether you’ve got an occasional gripe or are forever annoyed about something, complaining hurts your wellbeing—and your health. And the worst part? Research shows the more you do it, the worse it gets.

This is Your Brain on Complaining

Here’s the funny thing about the brain: the things the brain thinks about literally have the ability to change the brain physically (go down that mental rabbit hole for a second!). Specifically, we’re talking about complaining.

A study by researchers from Stanford University found that just half an hour of complaining every day is enough to physically damage your brain. It all has to do with the hormone cortisol.

When you complain, your body mimics the response it has to being under stress, releasing cortisol. Cortisol hampers your brain’s synaptic connections and speeds up the death of cells.

Over time, this causes your hippocampus—the art of your brain thought to control emotions and memory—to physically shrink, resulting in foggier thinking, duller reasoning skills and worsened memory.

Oh yeah, and you may have heard of cortisol for another one of its undesirable qualities: it’s closely associated with weight gain.

The most alarming part of all this is that negative consequences of complaining aren’t just tied to the complainer. Someone who spends a lot of time listening to another person’s complaining is vulnerable to the same effects! Yikes.

They say you’re the average of the five people you spend the most time with. If those people are complainers, you might want to seriously reconsider who you count among your inner circle.

Complaining isn’t just bad for the brain. Some researchers go so far as to say it can actually kill you—and there’s data to back it up.

According to a brand new Harvard study that lasted more than eight years and involved some 70,000 women, women who were glass-half-empty types (a.k.a complainers) lived an average of five years less than their glass-half-full counterparts.

Those in the complaining set were also less likely to make physical health like diet and exercise a priority. The opposite is true for more positive-minded individuals, who prioritize fitness and nutrition.

The correlation between outlook and exercise works in reverse, as well; studies show a direct relationship between exercise and a positive outlook, specifically among women.

So, it’s a vicious cycle: complain more and you’ll be drawn into behaviors that decrease your quality of life and your lifespan, which in turn breed more complaining.

Choose instead to look for the best in situations, and you’ll be more prone to positive results like longevity and good health, which in turn breed more positivity. 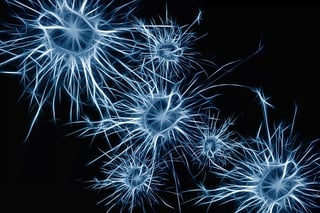 We just touched briefly on how complaining can be a vicious cycle. Well, it’s not just a behavioral thing. Scientists say when you complain, you literally re-wire your brain to complain more often and with a lower threshold for what triggers a complaint.

It’s a basic lesson in neuroscience. In your brain is a series of synapses that fire between one another to trigger thoughts. The space in between these synapses is called the synaptic cleft.

When you have a thought, be it about the route you take to get home from work or that awesome recipe for cheesy pizza rolls, one synapse shoots a chemical across the synaptic cleft to the next synapse, building a sort of bridge between them.

An interesting thing happens each time you think a certain thought: the synapses that fired grow closer together physically, making it easier to access that same thought in the future (this helps explain why things get easier the more we practice them).

So, perhaps you can see where this is going as it relates to negative thinking. The more you think about a complaint, the more you’re going to think about it in the future.

And what’s worse, it’s more likely to pop into your brain at a random moment, like when you’re walking down the street. It’s pretty scary when you think about the potential implications complaining could have on your outlook in the long run.

The good news is, this re-wiring process works not just with complaints, but with any kind of thought. You got it—the more you invite positive thoughts into your brain, the more inclined you’ll be toward positive thinking more of the time.

Let’s bring it back to the topic of this blog, your business. It goes without saying that if you’re the boss and you complain all the time, it’s not going to be good for morale.

But being a complainer can have another major detriment to your business: it hinders your ability to come up with creative solutions to problems (which is key to being an effective manager).

According to UNC psychology professor Barbara Frederickson, the best antidote to adversity is a built-up reserve of positive emotions. For positive thinkers, their thoughts are like a rubber band, helping them bounce back quickly from unfortunate situations by way of quick problem solving.

Complaining, on the other hand, has the opposite effect. Being a negative thinker undermines your brain’s ability to see the big picture and seek out creative solutions, and can also obscure potentially effective solutions form your view.

As an entrepreneur, facing hardships is inevitable. By now this should be clear. It’s how we respond to those hardships that defines whether we succeed or fail.

To adopt a penchant for success, ditch the complaining and practice this exercise instead. Next time you’ve got a gripe on the tip of your tongue, look for a way to turn the situation into something optimistic—even if you have to resort to “I’m thankful for this challenge that will help make me stronger in the long run.”

By reining in your aptitude to complain and replacing it with an optimistic attitude, you’ll set yourself up for a better mindset, improved health, longer life and more effective problem solving for your business.

Subscribe to the Profitable Entrepreneur and get our profit-boosting goodness delivered to your inbox weekly!

Build a Stronger Company by Hiring Your Weaknesses